It is with deep regret that we announce the passing of retired Allentown Firefighter Alan D. Whitehouse. 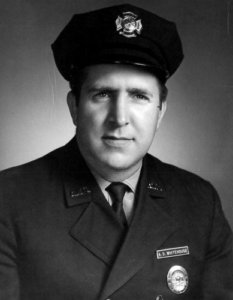 Alan David Whitehouse, 81, of Whitehall, passed away on Wednesday, April 15, 2020, in the Gardens for Memory Care at Easton. He was the husband of the late Hyang Nan “Jackie” (Kim) Whitehouse, who died in 2019. Born in Allentown, he was the son of the late John C. and Eleanor C. (Bitting) Whitehouse. Alan attended Allentown High School and participated on the J.V. Wrestling team. He went on to serve in the U.S. Air Force as a radar and computer technician in Air Defense Command. In 1962, Alan was appointed to the Allentown Fire Department. He briefly worked for Bendix Field Engineering in Baltimore, MD as a senior service technician and served in the Republic of Korea. In 1968, Alan was re-appointed to the Allentown Fire Department and after serving in all Allentown Fire Stations, retired after 31 years in 1994. Alan was a former member of Local #302 International Association of Fire Fighters (IAFF) for 25 years, serving as trustee, on the executive board, chairman of the Fire Fighter’s Ball and on the Safety Committee. He was also a member of the L.V. Timing Association, the Firemen’s Relief, and the Fearless Fire Company. Alan enjoyed hot rods, custom cars, volunteered for the American on Wheels Museum and loved hunting and fishing. Survivors: Alan is survived by cousins and close friends. Services: Due to gathering restrictions, services will be private and interment will follow at St. Mark’s Cemetery. Arrangements are entrusted to K.V. Knopp Funeral Home, Inc., Allentown.