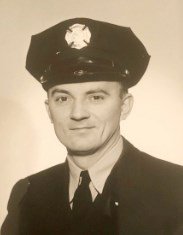 It is with deep regret that we announce the passing of retired Allentown Firefighter Otto J. Skrovanek.

Otto Joseph Skrovanek passed peacefully on June 22nd. Otto was born in Allentown. He served in the Army Air Force as a nose gunner during World War II, earning the rank of staff sergeant in the 15th Division. During his life, he worked as a firefighter for the city of Allentown. He enjoyed golf, bowling, and singing with his friends. Otto had a fine sense of humor and shared it often. He was always quick to extend a “Hello” to everyone he met. He was happiest when surrounded by family and friends. He is again holding hands with his best friend and spouse, Anna May Skrovanek. They enjoyed 65 years of marriage.

Otto was the son of Anton and Frances (Anderko) Skrovanek. He will be dearly missed by his children, Darryl (Norma), Leo (Pamela), Susan (Freeman), and Michael (Elizabeth); grandchildren, Laura, Stephanie, Ross, and Natasha; and great-granddaughter, Isabel.

A Catholic service will be offered at 10:00 AM Friday, June 26th at Weber Funeral Home 502 Ridge Avenue Allentown, PA 18102. Burial with military honors will be private. Online condolences may be made at www.weberfuneralhomes.com